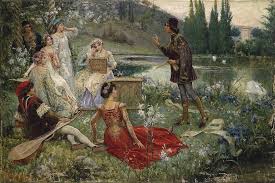 The New Decameron, or Tales by the Fireside

Translated into English by Michael Pursglove

“He that hath an ear, let him hear”

A strong wind had begun to blow. Long swirls of snow rose above the mountain peaks. You could only ski in places sheltered from the wind. The road was blocked; it was getting noticeably cold.

“Where is it then, this global warming?” I thought, huddling myself up against the biting blizzard. Maybe today we could have gathered even before supper.” It had got dark earlier and supper too was earlier. After a glass of chianti we could enjoy the agreeable crackling of the fire in the fireplace. Everyone looked at each other. “Well, who’s the bravest?” The prolonged silence was broken by an elderly Italian.

“My name is Antonio,” he began. “I’m a Roman Catholic priest in Milan. I was ordained fairly late – at thirty. I’m now nearly sixty. I been a skier since childhood. The Church does not forbid it, so in winter I make short visits to some nice places. I take services and teach theology in the University of the Sacred Heart. It’s been this way for many years. My academic interests include the history of the Church, forms of worship, and much else. Complex theological, historical and theological questions. Highbrow stuff. But there are also problems which worry people at an everyday level. They also form part of my ministry. In my time I was happily married. She was taken from me for ever, killed in a car accident. It was after this tragic event that I took the decision to dedicate myself to the Church. After ordination, like other men of the cloth, I took an oath of celibacy, so I have no children, and my nearest relatives are my nephews.

For many years I have been observing life around me in all its manifestations. Parishioners often turn to me with their questions and problems. Over time I began to come to definite conclusions from this torrent of information. All the same, I’m still an academic. The focus of my attention, study and research was the Revelation of St John, or, as its sometimes called, The Apocalypse. Revelations was written by St John the Divine on the Isle of Patmos in the second half of the first century A.D. The Church views the Apocalypse as a prophetic picture of the last days of the world and of the events which will happen before Christ’s second coming, when the Kingdom of Glory will be revealed, made ready for all believing Christians. The cruel pages of earth’s history have often prompted believers to think that their time is coming, before Christ’s second coming, and to seek in the world around them signs of the impending battle of Good and Evil.

Reality sometimes looked very like that, but there invariably ensued the restoration of shattered lives. Of course, as we grow older, each of us inevitably gets a foreboding of a personal apocalypse. Possibly because of this, there are many interpretations of Revelations, written almost exclusively by researchers of mature years. But right now is a special period. It looks very much as if Mankind is palpably approaching the conclusion of its programme. Living conditions are changing on planet Earth. The creation of the world wide web has led to irreversible changes in societal relationships, and to the planetary unification of a variety of information, data bases, knowledge and intellectual possibilities. In former times the emphasis was on the development of the personality of the individual; he it was who was the bearer of knowledge, the creator of new information. Today everything is on the Net; you just have to look there. True, the information is not always accurate, but that is not a basic criterion for its assimilation. The development of digital technology can, in a short space of time, lead to the rise of Artificial Intelligence. That is to say, Man, the creation of God, living by principles set down for him, tries to create something which will function according to a programme which he himself has created. At least, in the initial stages, but then who knows what mankind will be guided by in its actions. This is a kind of evolutionary change, or rather an attempt to change mankind itself.

According to the Bible, the heralds of the last days are the Four Horsemen of the Apocalypse. They appear one after another after the opening of each seal – the first four seals of the seven seals of Revelation.

The Lord summons them and endows them with strength.

In the twentieth century many people thought that Spanish flu was a biblical plague, but then came war and famine. But no, it passed. However, radical changes in human civilisation by the end of the twentieth century accelerated dangerously. Many new threats arose, both manmade and natural. Now I look, it seems to me that the first seal has already been opened and we shall soon see the rider on the white horse. In distant China, at the end of December a new and dangerous infection broke out from somewhere and it looks like moving in our direction and taking hold of the world.

In order to provide firm evidence, I shall say what my assumptions are based on. Among sacred and theological texts there are those which are generally accepted, which are canonical, but there are apocryphal texts of varying authenticity and have been for many centuries. Some of them, like the Book of Enoch, for instance, are also included in canonical texts (the Book of Enoch is included in the Ethiopian Bible). It is all a question of times. There are ancient pre-Christian apocalyptic texts which talk of the Day of the Last Judgment. In different sources this varies from eight thousand to ten thousand years from the creation of the world. These sources are not canonical and are not in the Old Testament. We can therefore accept or reject their propositions. It’s a matter of faith, but we can’t ignore them completely. I remind you that in the Catholic Church the view is generally accepted that the world was created from 4713 to 4004 years before the birth of Christ.

We may calculate that little remains, taking into account the long periods of time set out in Revelations.

The truth is not always accessible to mankind, and absolute truth is inaccessible in principle and can only be accessed through revelation.

Unbelief, scepticism and denial of basics are characteristic of our time and are signs of the moral decline of our civilisation. Man is weak and sinful. But you must live every day as if it were your last. with, in your heart, the truth accessible to our understanding and, in your soul, faith and then all these unavoidable events will not catch us unawares. Salvation lies in always being on the side of Good.”

With these words Father Antonio concluded his sermon (it was most unlike a story). Out of respect for his office and his sensible words, as well as from lack of knowledge of the subject, no one responded and there were no questions, although round the fire were people of other persuasions. Gradually everyone began to disperse; a new day awaited us.

The time came for me to leave. As I went upstairs up a carved wooden staircase which turned a different way on each floor. I thought: “All the same, celibacy is a severe trial for a Catholic priest. It’s hard for a man on his own and sad thoughts come into his head more frequently; he regards the world more pessimistically. And the truth? Yes, you cannot know it to its full extent, especially at the level of such universal concepts.” With that I went to bed. Reckoning that everything would be all right. How wrong I was!

Now, as I finish this tale, it is the end of March 2020 and since my meeting with father Antonio just two and a half months have passed.

However, how the world has changed. Here I am in lockdown fully quarantined in my house in a suburb of Barcelona. The epidemic, the plague, is raging in Spain. Every day some thousands fall ill and many die. It is more serious in Northern Italy, where father Antonio conducts his ministry. There, many are dying, several hundred a day, including medical staff and Catholic priests. I sincerely hope that nothing bad has happened to father Antonio.

This pandemic is perhaps not the deadliest in the history of Mankind The death rate in measles and cholera epidemics reached thirty per cent; during the Black Death (bubonic plague) it was ninety per cent. But this pandemic causes a certain mystic horror in modern Man. The fact is, probably, that it has demonstrated to Mankind in stark terms how little it can do in the face of serious tribulations. It seems we have deceived ourselves, arrogantly exaggerating our knowledge and achievements. In fact, the situation has returned us to a time when modern medicine did not exist. For now, we can only count on the capabilities of our own organisms and the help of friends.

Here he is – the horseman on the white horse. As Shakespeare said: “A plague on both your houses.” Father Antonio was right. We should have thought about it earlier with, in your heart truth, and in your soul, faith.

Perhaps there is still time and, after taking timely measures, we won’t see the horseman on the red horse. It is time for Mankind to grow up, and grow wiser, to rid itself of rancour and distrust, to learn to solve together the problems with which fate presents us, irrespective of our personal political or religious views, or the absence of any such.

Mutual hatred is more terrible than epidemics and cataclysms. The poet Robert Frost wrote this about it:

Some say the world will end in fire,
Some say in ice.
From what I’ve tasted of desire
I hold with those who favour fire.
But if it had to perish twice,
I think I know enough of hate
To say that for destruction ice
Is also great
And would suffice.

It is already clear that the pandemic will change our world. For the better, I hope. At least, I’m counting on that.